Conversation hearts were once my favorite Valentine candy. That abruptly changed one February evening as I walked alone to my car after church. He was waiting for me in the parking lot, his hand outstretched with candy hearts to pour into mine. He smiled and asked for a kiss. A kiss? 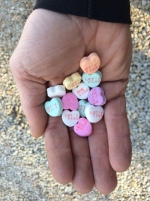 As the elderly pastor drew closer, I assumed he meant a kiss on the cheek. “No,” he said, “I mean a kiss on the lips. My wife and I haven’t had sex for a long time. Look at the hearts in your hand; they all say ‘kiss.'” Then he kissed me before I could object! I stood there in shock, eventually mumbled something about needing to get home, then drove away in tears. I was in my mid-twenties, married, and the mother of a second grader and a kindergartener.

Soon afterwards I told my family what happened. The pastor and his wife were close friends of my parents. Prior to my dad’s death, they would come to my parent’s home and pray with us. The pastor had recovered from cancer which gave everyone hope. His wife was my mother’s Sunday school teacher, and she was also a mentor to me. My mother was so surprised! She just couldn’t imagine why he acted that way. She encouraged me to “just be nice” and not to cause any trouble at church. I could not forget the trust my deceased father had placed in this man, however, so I decided to write a letter and let him know how deeply his actions hurt me. I thought he would apologize.

He met me in the parking lot the next time I attended church. He waved my letter at me angrily and told me I had completely misunderstood his intentions! He dared me to ever mention it to anyone again. I was dumbfounded. Soon I stopped leading the prayer group he and his wife attended, and before long I left the church I grew up in for good.

Some might think, “It was just a kiss.” But, the truth is it was a deep betrayal of my trust by a family friend with spiritual authority. As a result, my relationships with a beloved mentor (his wife), my church, and even myself began to change.

The “me too” disclosures in the media recently caught my eye. Many people believe holding a perpetrator accountable sets victims free. No doubt, a sense of personal power may be recovered in this way, along with hope for justice. I have found my own freedom, however, to be more closely linked to acknowledging the lies I came to believe about myself as a result and then allowing truth to penetrate the deepest recesses of my heart.

Recently, I purchased a bag of conversation hearts to sort out the “kiss” ones for the photo above. Do you know what I found? Hearts with words like “true love,” “hope” and “one and only” were also in the bag. Words that reflect the character of God as I’ve come to understand Him since my healing began. I think I still like conversation hearts after all. I just needed to determine which ones to keep and what to throw away.